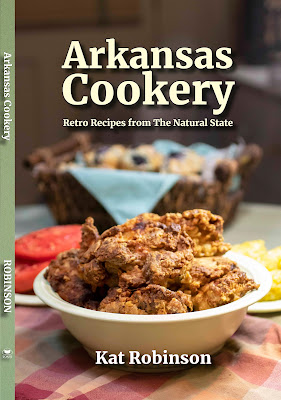 Preserving the food and foodways of Arkansas is a personal mission for author Kat Robinson. Whether it's visiting and documenting Natural State restaurants, exploring farms and manufacturers, or diving into recipes culled from generations of Arkansas cookbooks, Robinson's mission is ever-ongoing. Now with her eleventh book, Arkansas Cookery: Retro Recipes from The Natural State, she takes her research to the kitchen to conjure beloved dishes preserved in the cookbooks from churches, community groups and organizations from the heart of the 20th Century.

"The way we cook is just as much a part of our food culture as what we cook," Robinson shares. "Our recipes are often handed down from generation to generation, tinkered with by each progressing cook to fit what's available on the market shelves at the time. By going back to these cookbooks that are forty to eighty years old, we can see how our grandparents ate and what they were serving.

"The way we share recipes has changed significantly in the 21st Century - which is marvelous when you want to experience food from other regions or cultures. But once we got to the point where the internet was easily accessible to everyone, determining the source of our recipes became that much harder.

"By going back to the old spiral or comb-bound cookbooks created by ladies auxiliaries, church committees, business folks and their families and youth groups, we can find this perfectly preserved moment of culinary history. I'm aiming to recreate these dishes so our future generations have a record of how we once ate." 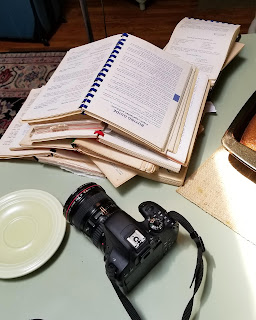 Robinson's commitment to preserving these recipes extends to her long-term project of collecting cookbooks from all over the state. To date, of the nearly 2000 cookbooks she's collected from across time and cultures, more than 400 of these are Arkansas cookbooks, representing 63 of the state's 75 counties. She's found these in thrift stores and flea markets, via online sales and through personal gifts from avid readers.

The author spent months researching these recipes before taking hundreds of cookbooks with her to The Writers' Colony at Dairy Hollow, a unique writers retreat created by Crescent Dragonwagon and Ned Shank at their former bed and breakfast and restaurant in Eureka Springs. The book is dedicated to the pair.

The facility was just the second bed and breakfast in the state, and the restaurant was celebrated nationwide in Gourmet, Bon Appetit, and The Wall Street Journal. In 1998, the edifice became home to The Writers' Colony at Dairy Hollow, and its Culinary Suite is the only such suite dedicated for use by food writers in the United States.

"The opportunity to utilize this unique setting while creating this cookbook was extraordinary," Robinson offers. "Having a completely and fully supplied kitchen is essential for this sort of work, and the Culinary Suite doesn't disappoint, with just about every tool you can imagine available." 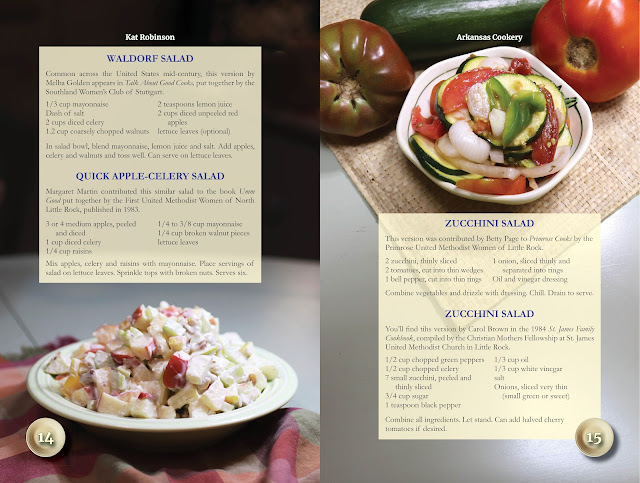 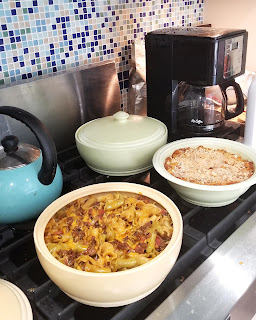 Over the course of two weeks, Robinson redacted, cooked, plated and photographed nearly 100 dishes for this effort. While later recipes were easier to duplicate, recipes from before the widespread use of microwaves and convenience foods offered unique challenges.

"Through time, many of our ingredients available have changed," Robinson relates. "The size of portions are quite different. For instance, cream cheese used to come in three ounce packages. Today, blocks are eight ounces. Some items are harder to find, like canned shrimp and golden mushroom soup. Our bananas are different - the Gros Michel used in the 1950s is all but extinct, while the Cavendish is what we get at supermarkets today. Interpreting those recipes and redacting them with modern ingredients was part of my challenge."

Another difficulty arose because of typewriters.

"Back before word processors and computers, if you made an error while typing, you had a few choices - you could go back and type over and correct a recipe, or you could just move on. What I found with many of these recipes is that ingredients would be out of order, or added at the end, because in the process of typing something would be omitted. You can also see places where the directions are out of order. Reading completely through and determining what the intent of those instructions were was a particularly important part of what I had to tackle." 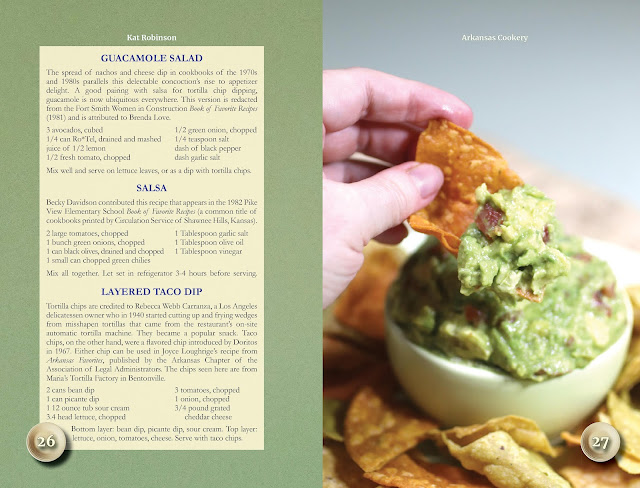 To photograph the recipes, Robinson utilized only items available at The Writers' Colony - napkins from the kitchen for color, the light green and yellow ceramicware from the kitchen itself, cookbooks and backdrops. The suite's skylight and green painted table provided the excellent setting and backdrop for shooting, offering a magnificent natural light during the day and sepia in the evening. The variation in color came from the time of day each dish was shot, the light outside, and even the weather. While photographing each dish, Robinson aimed to capture some of the aesthetics of mid-century cookbooks. 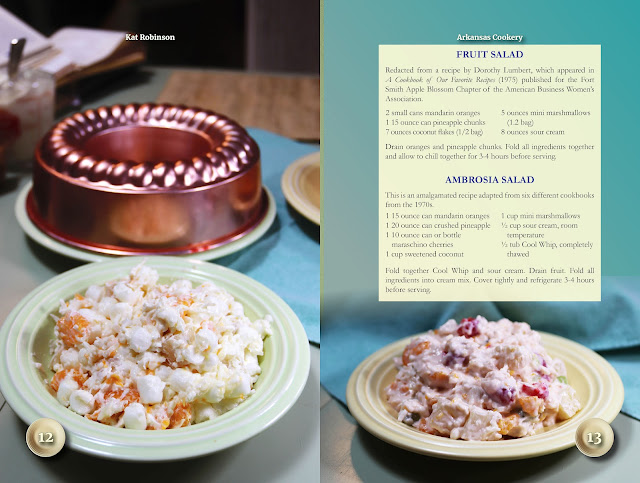 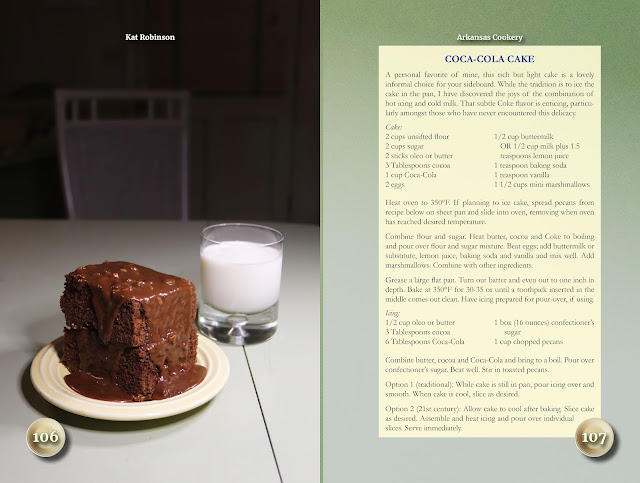 Robinson says her biggest challenge was learning how to properly create molded salads - which came in many varieties and included everything from fruit to nuts to soup.

"I must have made the black cherry salad four times before I managed to get the right proportions, and get it to release properly from the mold. But it was important to get the recipe right - molded salads were so very common in these cookbooks, particularly in the 1960s and 1970s, centerpieces to show off on the table. By the 1980s, they had all but disappeared from cookbooks, which may be why I never learned how to properly mold gelatin salads when I was younger. They're beautiful, and I loved photographing them." 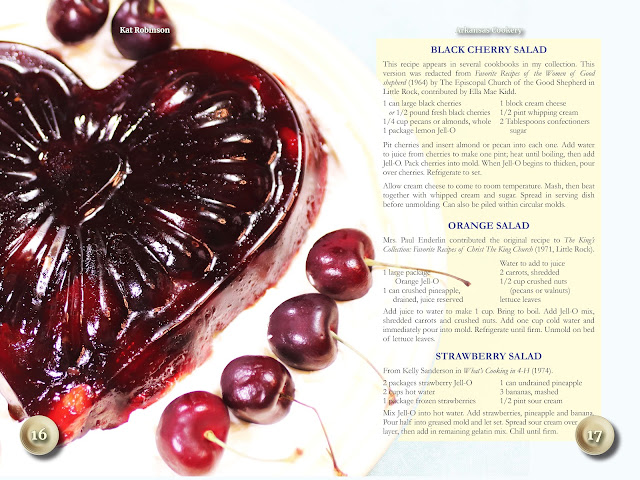 Robinson hopes to create more period cookbooks in the future. For now, she's pivoting to teaching people how to cook classic Arkansas dishes.  In February, she'll host three hands-on workshops on Arkansas cooking, teaching individuals how to cook fried chicken, biscuits, potatoes and gravy, squash casserole and lemon chess pie. The five hour sessions will be limited to five attendees each. The workshops will be held in the Culinary Suite at The Writers' Colony on February 13th, 19th and 20th. After the dishes are made, attendees will be invited to sit down to enjoy the repast and chat with the author. Admission is $100 per person and is first come, first served. To register, click on the links below:

Arkansas Cookery: Retro Recipes from The Natural State is available at bookstores nationwide. You can obtain signed copies through Little Rock's beloved WordsWorth Books, Green Corner Store and at the Bookstore at Library Square in Little Rock's River Market. Copies are also available at Terra Studios, All Things Arkansas, and Hot Springs Souvenirs and Gifts. Signed books can also be ordered directly through Tonti Press.

Kat Robinson is an Arkansas-based author, TV host, food historian and travel writer living in Little Rock, Arkansas. She is the filmmaker behind "Arkansas Dairy Bars: Neat Eats and Cool Treats," the documentary based on the book of the same name. She's also the host of “Make Room for Pie,” the Larry Foley-produced Emmy-nominated documentary on pie makers in Arkansas, as well as the Arkansas PBS program “Home Cooking with Kat and Friends.” Her eleven books focus on aspects of culinary tourism and home cookery. She is the author of Arkansas Food: The A to Z of Eating in The Natural State, A Bite of Arkansas: A Cookbook of Natural State Delights, and 101 Things to Eat in Arkansas Before You Die, among others. She is a member of the Arkansas Food Hall of Fame Committee and the Arkansas fellow to the National Food and Beverage Museum.

For more information, review copies or digital book galleys for review, send requests to inquiries@tontipress.com. The author is also available for interviews, by phone or via Zoom. 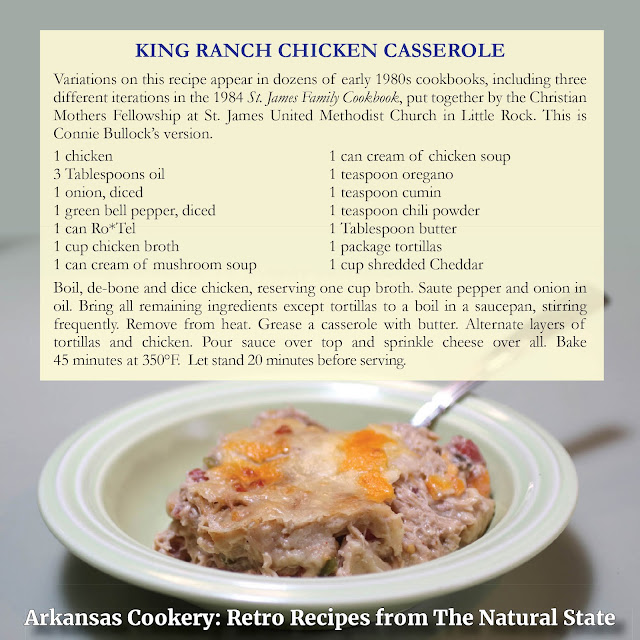 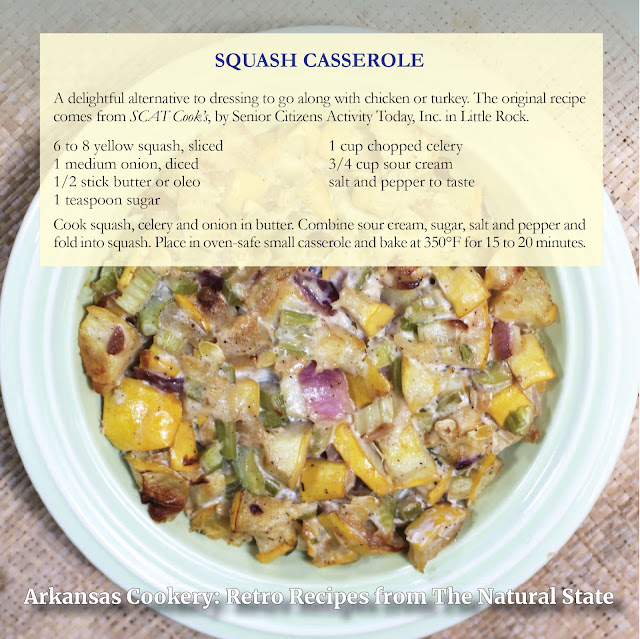 Arkansas Pie: A Delicious Slice of the Natural State

Classic Eateries of the Ozarks and Arkansas River Valley

Classic Eateries of the Arkansas Delta

Another Slice of Arkansas Pie: A Guide to the Best Restaurants, Bakeries, Truck Stops and Food Trucks for Delectable Bites in The Natural State

Arkansas Food: The A to Z of Eating in The Natural State

101 Things to Eat in Arkansas Before You Die

102 More Things to Eat in Arkansas Before You Die