PR - A Bite of Arkansas: A Cookbook of Natural State Delights

A Bite of Arkansas:

A Cookbook of Natural State Delights 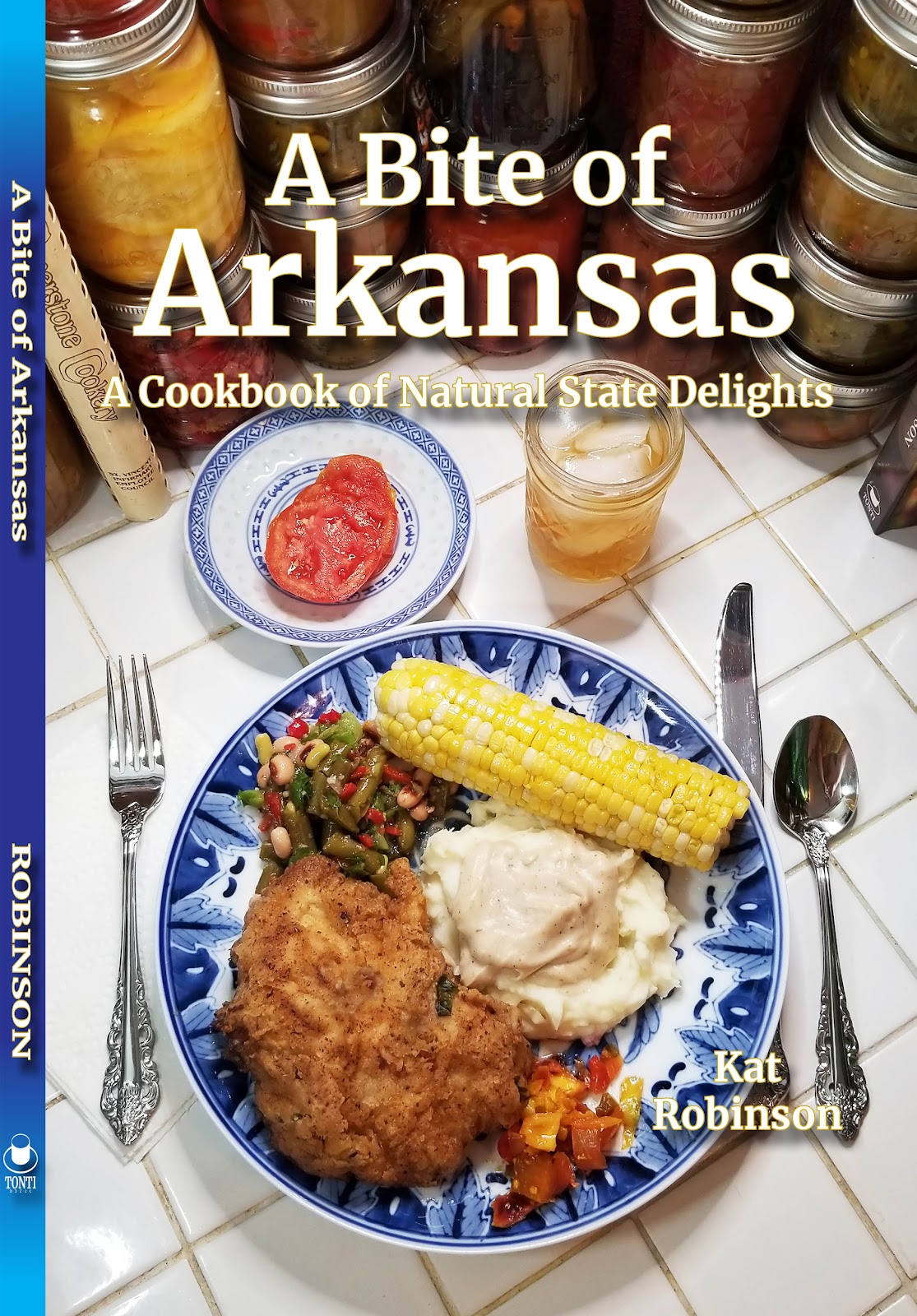 The state of Arkansas has received much national attention over the past decade as a budding new hot spot for great cuisine. When response to the pandemic closed restaurants and curtailed travel, Arkansas's beloved food historian and travel author turned to a far more daunting project - sharing her own eating traditions with the full-color tome, A Bite of Arkansas: A Cookbook of Natural State Delights.

"I had assumed I'd be writing cookbooks when I decided to retire from the road," Kat Robinson shares. The Little Rock-based author and host of the Arkansas PBS specials Make Room for Pie found herself sidelined from what would have been a jam-packed spring and summer of traveling, researching and speaking to groups about food.

"In the early days of COVID-19, we didn't really know how it spread. I was concerned I might inadvertently bring the virus into communities on my tires, or accidentally spread it amongst the restaurant community," Robinson continues, "so I made the difficult decision to isolate with my family."

In the spring, Robinson pivoted from traveling and sharing stories about restaurants and festivals to creating adjacent culinary projects. She worked with Arkansas PBS to conjure the state's first no-contact cooking program, Home Cooking with Kat and Friends, in May. Over the spring and summer, she collected the recipes being baked, fried and served by people in her social media feed for a special project, a book called 43 Tables: An Internet Community Cooks During Quarantine, which was released in October. Working on these two projects and having unprecedented time at home inspired Robinson to tackle another idea.

"I've never really sat down and written down the recipes I've used in my life before, not in any really organized way. Being limited to what was in my cabinet and what I could get on grocery pick-up, and finding the need to feed my folks, brought me back into the kitchen. For the first time in about a decade, I had time to cook, rather than covering those who cooked for others."

In A Bite of Arkansas, Robinson dives into a hodgepodge of memories, from breakfast at her grandparents' homes to cooking adventures in college, through time in Girl Scouts and the medieval re-enactment group The Society for Creative Anachronism. Many of the dishes are adapted by those her mother, Kitty Waldon, cooked for her and others over the years.

"My mom has her own cookbook experience that has heavily influenced what I share. In 1984, she was the editor of Cornerstone Cookery, put together by the St. Vincent Infirmary Employee Council. Many of her recipes, some from our family, and so many from her friends and co-workers made it into the book. It's the one cookbook I use above all others."

The stories highlight not only dishes Robinson makes, but their place along her personal timeline. Sections are built around meals rather than types of dishes; after a whole treatise on breakfast, the book dives into sandwiches, stews, chicken dinners, catfish feasts and more. The more than 140 different recipes include the dishes for which the lifelong Arkansawyer has received the most requests - curried chicken, chili, and a full spectrum of bread puddings. Not to disappoint fans of her first book, Arkansas Pie: A Delicious Slice of The Natural State or her fourth book, Another Slice of Arkansas Pie: A Guide to the Best Restaurants, Bakeries, Truck Stops and Food Trucks for Delectable Bites in The Natural State, she's includes several of her favorite pies to make, including a fresh blueberry pie and an oven-baked version of the old-fashioned chocolate fried pies her grandmother made for her as a child.

Robinson also spent much of her time diving into her massive collection of church and community cookbooks, which she has scrounged from thrift stores, basement sales and friends' shelves.  She has already begun working on what will be her tenth book, tentatively titled The Arkansas Church and Community Cookbook Collection, Volume 1.  Robinson plans to continue to collect and delve into more cookbooks from around the state, a pet project she hopes will culminate in a statewide database of historic recipes.

A Bite of Arkansas: A Cookbook of Natural State Delights will be released as a hardcover edition on December 15, 2020. A paperback edition premieres January 26th, though Robinson is offering a limited preview softcover edition through Tonti Press. Books are available through Little Rock's beloved WordsWorth Books, as well as nationwide retailers such as Bookshop, Barnes and Noble, Amazon and Alibris. The hardcover retails for $37.99, while the paperback will sell for $27.99. The book is 220 pages, full color throughout, featuring images taken by the author of dishes she cooked during 2020. The book is Robinson's ninth overall and second of two she has released this year.

For more information or to arrange an interview with the author, or to receive a review copy or digital galley, please send your request to inquiries@tontipress.com.

More information and to order: TontiPress.com

Kat Robinson is an Arkansas-based author, TV host, food historian and travel writer living in Little Rock, Arkansas. She is the host of “Make Room for Pie,” the Larry Foley Emmy nominated documentary on pie makers in Arkansas, as well as the Arkansas PBS program “Home Cooking with Kat and Friends.” Her nine books focus on aspects of culinary tourism and home cookery. She is the author of Another Slice of Arkansas Pie: A Guide to the Best Restaurants, Bakeries, Truck Stops and Food Trucks in The Natural State, Arkansas Food: The A to Z of Eating in The Natural State and 101 Things to Eat in Arkansas Before You Die, among others. She is a member of the Arkansas Food Hall of Fame Committee and the Arkansas fellow to the National Food and Beverage Museum.

For more information, review copies or digital book galleys for review, send requests to inquiries@tontipress.com. The author is also available for interviews by phone or via Zoom.

Arkansas Pie: A Delicious Slice of the Natural State

Classic Eateries of the Ozarks and Arkansas River Valley

Classic Eateries of the Arkansas Delta

Another Slice of Arkansas Pie: A Guide to the Best Restaurants, Bakeries, Truck Stops and Food Trucks for Delectable Bites in The Natural State

Arkansas Food: The A to Z of Eating in The Natural State

101 Things to Eat in Arkansas Before You Die

102 More Things to Eat in Arkansas Before You Die

A slice of success: Pie was just an appetizer for Kat Robinson